While the United States, Great Britain, and Canada would be the obvious choices for the leading places that listen to the Ed Boston Podcast, there are literally listeners from dozens of different countries around the world.

In a new feature, we will give a short shout-out to a different country that we have listeners from every few days, with a little background on each place we list.

Some places (like today’s feature) are very interesting to us, and show the power and reach of the World Wide Web. We take it very seriously that the Gospel of Jesus Christ we preach is able to go places that we would never personally be able to go.

With today’s post, we will highlight Sri Lanka. The really surprising aspect of Sri Lanka being on the list is that it currently is the #4 country for listeners. The rankings change pretty regularly, but we would have never guessed this country being #4.

Sri Lanka is the 58th most populated nation in the world, with roughly 21,444,000 people, and an annual population growth rate of 1.14%. Sri Lanka has a birth rate of 17.6 births per 1,000 people and a death rate of 6.2 deaths per 1,000 people. Population density is highest in western Sri Lanka, especially in and around the capital.  Sinhalese constitute the largest ethnic group in the country, with 74.8% of the total population.

Sri Lankan Tamils are the second major ethnic group in the island, with a percentage of 11.2%. Sri Lankan Moors comprise 9.2%. Tamils of Indian origin were brought into the country as indentured laborers by British colonists to work on estate plantations. Nearly 50% of them were repatriated following independence in 1948. They are distinguished from the native Tamil population that has resided in Sri Lanka since ancient times. There are also small ethnic groups such as the Burghers (of mixed European descent) and Malays from Southeast Asia. Moreover, there is a small population of  Vedda people who are believed to be the original indigenous group to inhabit the island. 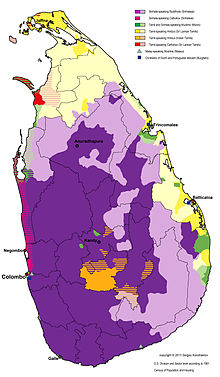 The distribution of languages and religious groups in Sri Lanka, 1981

Sinhalese and Tamil are the two official languages of Sri Lanka. The Constitution defines English as the link language. English is widely used for education, scientific and commercial purposes. Members of the Burgher community speak variant forms of Portuguese Creole and Dutch with varying proficiency, while members of the Malay community speak a form of Creole Malay that is unique to the island.