Memorial Day is all about the memory of those brave men and women who gave the ultimate sacrifice for our great nation. Today, as I had the privilege to speak about the history of Memorial Day,  I also had the honor of talking with a 93-Year-Old World War II Veteran. I’ll call this hero Mr. S and I will try to share with you what a joy it was talking with this member of “The Greatest Generation”.

The picture above was taken just before Mr. S was about to depart from New York Harbor on his way to LaHavre, France when he was 19 years old. After heading to Germany to the Reception Center near Cologne, Mr. S was assigned to the 35 Infantry Division Signal Company.

Once the hostilities in Germany concluded, our hero arrived back in New York after being transported on the Queen Mary.  He was discharged from the Army in July 1946 at Fort Sheridan, IL with the rank of Sergeant.

Mr. S proudly showed me this polo shirt that shows the medals that he earned while serving our great nation. 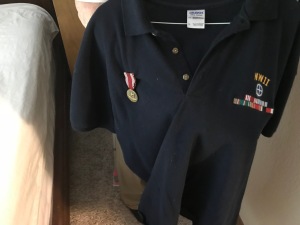 The thing that I noticed the most about Mr. S was that he totally knows the true meaning of Memorial Day. You see, Mr. S reminded me that there were those he served with didn’t come home alive. Yes, that’s what Memorial Day is all about.

As a final note, you might wonder how I got all of these specific details about Mr. S and his time in service. He showed me his Military Service Record that included all the information. I love any time I get to spend with a World War II hero. Mr. S made this solemn day one that I will remember forever.